The modern game of chess started around 1475 in Spain when the queen and bishop got a much more powerfull move. This form of chess got such names as "Queen's Chess" or "Mad Queen Chess" (Italian alla rabiosa = "in the mad manner"). This led to much more value being attached to the previously minor tactic of pawn promotion. Checkmate became easier and games could now be won in fewer moves. These new rules quickly spread throughout western Europe and in Spain. It is rumoured that the enhanced move for the chess queen started after the coronation of the powerfull queen of Spain Isabella I.

An Italian player, Gioacchino Greco, regarded as one of the first true professionals of the game, authored an analysis of a number of composed games that illustrated two differing approaches to chess. This influential work went to some extent in popularizing chess and demonstrated the many theories regarding gameplay and tactics. In 1656 his manuscripts were published in London under the name: "The Royall Game of Chess-Play". 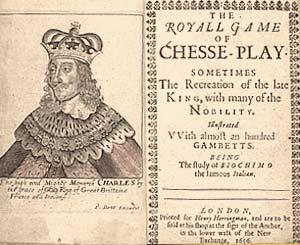 In the eighteenth century the center of European chess life moved from the Southern European countries to France. Centers of chess life in this period were coffee houses in big European cities like Simpson's Divan in Londonand Café de la Régence in Paris.

The first modern chess tournament was held in London in 1851 and won by the German Adolf Anderssen. Anderssen was hailed as the leading chess master and his brilliant, romantic attacking style became typical for the time. Steinitz layed the foundation of strategic chess with his attention to avoid weaknesses in one's own position. Chess as a sport began in 1886 when the first world-champion of chess Steinitz beats the German master Zukertort in a match.